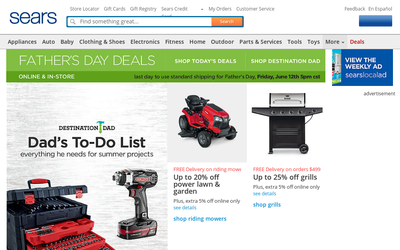 Read, from new to old, 2 reviews about Sears.com

Bought a brand new laundry pair (Kenmore Elite approx. $4,000) eight weeks prior to moving into a new home and scheduled delivery and installation at the time. Two weeks prior to delivery and installation, I received a confirmation call for the date and time it would take place; same call received four days prior. The day before delivery and install was to take place, I received a call from Sears saying the date was to be delayed and would now happen on the Saturday of a long weekend - no explanation as to why after two confirmation calls. I spent almost an hour elevating this in order to get some sort of credit as I had already taken a day off work to accommodate the delivery/install; I was told they would not commit to anything until after the install had taken place. When Sears showed up, they dropped the units and asked me to sign off without installing them. I spent a good ten minutes explaining that delivery AND installation had been paid for and that they were to finish the job before I would sign off, and they did. This is where the next round of trouble starts. Installation was obviously done by someone completely unqualified as I went to use the washer later that day, and water sprayed everywhere - nothing was hooked up properly. Had it fixed by a friend who's a plumber and moved on to use the dryer. Again, this was not installed properly and I have to wait 2-3 weeks to get someone from Sears to come out and take a look. After many more calls to Sears CS, and trying to reach out to them via Twitter, their response has been pathetic. They've offered a store credit for less value than delivery and installation cost me and won't budge on anything more. Shopping for all new kitchen appliances at the moment, and there is no chance I will even make the rounds at Sears - never shopping with them again.

I wish I could rate less than 1 star. Purchased a new washer and dryer 5 months ago. Washer quot working and it took 2 weeks just to get a technician out. Several calls to sears customer service and several cold transfer calls nothing helped. 3 weeks later washer was fixed. Next thing the dryer quits working. Called sears again and they said they would send the part out to me to install myself. Technician was scheduled for the following Tuesday. Part never showed and tech cancelled. Called sears and they said they didn't order the part because the technician hadn't looked at it yet. Sears diagnosed over phone first time and even emailed technician to let him know part was coming. They never let anyone know the part was on cancel. Had to wait another week for tech to come out to diagnose so he could order the part. Tech left before the scheduled time. And now I have to wait again. For another week..I will never ever buy from sears again!