Expect More. Pay Less. Free Shipping with $25 purchase or free same day store pickup on all online orders. Plus, save 5% every day with a Target REDcard. 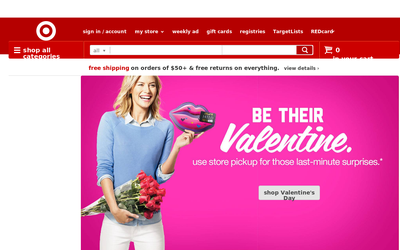 Read, from new to old, 3 reviews about Target.com

Went everywhere to look for Adam Lambert's #TheOriginalHigh new CD album release and could only find it at Target. Drove to Walmart, Best Buy & Fred Meyers - none found. Just love Target for keeping up with new music releases. :))

The box was broken up

My son bought a Samsung flat screen tv, for my Xmas gift. The picture was bad, and I wanted a bigger screen. My husband took it back, two mos after we received it. We had installed it only a week prior. My son also had bought a several year warranty pkg. they would not give cash back, we had a receipt. They had no larger samsungs! He was stuck getting a several hundred dollar gift certificate, and 50 cash! He went straight to Costco, bought the bigger Samsung, for less than Target would have charged, and they gave him 3 months to return, unlike the Target's one month! They were rude and condescending. Never purchase a big ticket item again from Target!