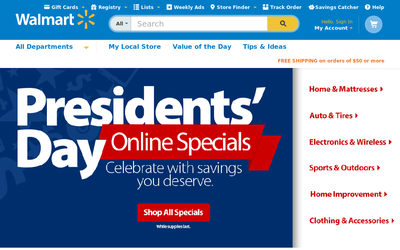 Read, from new to old, 11 reviews about Walmart.com

i am very disappointed in the new bread your store in Welland is making now . It is much smaller & we find it very doughy. I have stopped buying it and know at least 15 people that have stopped buying it too. When we go South we also buy the bread & never have complained. I think you should go back to the old recipe which was so GOOD.

Hello, I recently purchased the South Shore Soho Collection 4 piece Bedroom Set on Walmart.ca. The photo indicated a headboard, 2 dressers and a night stand which equals four pieces in total (as described in the title). Although four boxes were delivered, they consisted of 1 headboard, one dresser, one night table and a bed base. I called Walmart to ask when the second dresser would be delivered and the manager Robert told me that the set did not include a second dresser. I filed an official complaint with him. I paid 498.00 plus tax for this set expecting that it consisted of the four pieces shown in the photograph. Had I known that it did not include the second dresser, I would have sent it back before assembling and using it. Now in order to purchase the additional 5 drawer chest, I will have to pay another 169.00. I desperately need the missing piece and have no other option but to purchase it from Walmart. I cannot find it anywhere else. Since the time when I made the initial phone call, the photograph and written description on line has been changed. I have not received any follow up from Walmart regarding this complaint which I made 3 weeks ago. Is there anyone at Walmart that cares in the slightest that this kind of service is being given to their customers?? Your advertising is false and misleading. This customer service is absolutely shameful. Susan Tomei

recently I had passport photos taken at walmart, in royal oak.I was shocked when I was told it would cost $26.00, the only reason igot it was because I was in a hurry. The same day I went to Costco and to my surprise the price was $6.99.Wal-mart does give you a passport holder which is probably worth $5 to $10. I think this was a big rip-off, and I will do everything in my power to avoid buying anything in Wal-Mart again, and I think everyone should boycott them, very dishonest people.

I went to two walmarts looking for this this bed no luck i didn't have my reciept so i was told i couldn't get my money back. I asked could they tell me what walmart has it. They claimed they couldn't tell me there computer isn't equipped for that so she has to call and the are only affiliated with two. Okay she calls no bed so i called the tucker ga walmart and asked did they have the bed he said yes so i went there to return my bed gets there spoke with the employee at the door to let them know I'm retunung this bed the supervisor over sales had to come back to handle the transaction i dont no why but they finally rang evertthing up and told me to have a nice day do i asked wheres my receipt she said oh you xont get one and i said yes yes i do she said if you didn't bring one you don't get one bullshit so she gave me one and wrote on my receipt that was my last return so on the way out the ask for a receipt. And i said i was told that im not suppose to get one mind you they were watching the whole time so they call out the manager a he adk for my reciept so i told him what the supervisor said so he says call the police and he push my cart to the side so i pulled out my receipt and showed it to him he tried to dnatch it out my hand and rip it i grabbed my cart and left. And the bed i got is a full not queen but was in a queen box never buy there blow up beds they no there no good. And i video the hole thing its on you tube is this how ypu want you business run.😘😘😘😘😘🎦

My name is Carrie Lance and I have had the worst experience at the Walmart located off kings hwy. Near tanger outlets!! My family owns a beach house and so we visit on many occasions and as we come in we always stop at your lovely Walmart to get our groceries, etc. For the week. Well, tonight it was just my 20yr old daughter mind you I am 39yrs old and upon last scanned item at self checkout the lady proceeds to say to us I need both IDs or else by policy I can't sell it?? Wait a minute ok as I gather what she just said to us first of all without even checking ID she automatically ruled us out?? Mind you I am 39 yrs old and my daughter is with me shopping!! Okay, so I explain to her wait she is my daughter and number 1. I have never in my life heard of such!!! 2. I am the one paying and scanning the items. Regardless this lady was so I'm the wrong as she would not allow me to give my ID let alone she was a very disrespectful employee. Laying one hand upon her cheek tapping her foot. I have never heard of such. I have contacted my lawyer and will be in touch!! Start to a bad getaway all because she picks and chooses I guess and yes, We have already looked into same stories as I am not the only one. We give alot of business to this Wal-Mart and will not plan upon returning anytime soon. I sure hope this lands in the right persons hands soon!!! I. Know I would never, ever hear of such if I walked in a convenient store and daughter was with me!!!!!!! Thanks, Carrie Lance

I have been shopping at walmart calgary - all of them since they opened- have always been disappointed with the lack of staff & the lack of knowledge they have- am at the end of my rope-why can't the staff be trained on shelf knowledge-i spend at least 1000. A month there-always have to go to Safeway for any fresh broccoli or better meat- u have the means- why can't u make it better for one stop shopping?